Some people have been pretty curious about my dog, who happens to have three legs (I’m looking at you K.A. 😉 ) so I wanted to share. I did a similar post about my cat, Alex, back in January (click here to read it). Small disclaimer: My dog does have three legs and I will be showing pictures of her. Just wanted to let you know :).

First, I’m going to start out with Allie’s full story.

(Allie as a puppy) ^^Credits to the shelter for this picture

How we got her:

We had been looking for a dog for a little while. Finally, we found Allie. She and her sister had been rescued from a shelter where they were getting ready to be euthanized (killed). She was found with her sister in some woods by a police officer.

She and her sister were extremely scared and shy. They also had skin problems and were underweight. She was not really the kind of puppy you’d want to bring home, but we decided to anyway. (Side note: We couldn’t adopt her sister because she had more skin problems and wasn’t healthy enough)

The first few days we had Allie she refused to eat anything or use the bathroom. She didn’t really act like a normal puppy. She didn’t run around or play. I remember holding her in my arms as she curled up in a ball. With love and help from the cat and us, Allie became a normal dog. She still is a little skittish (probably because of abuse) but she is otherwise just like any other dog.

(Allie on her lead)

Allie had a habit of chasing after animals (squirrels, rabbits, deer, etc.). She uses a long leash thing that we clip to her collar because our backyard is not fenced in and we have woods behind it. The collar she had at the time wasn’t very strong.

It was sometime in December (2013) that my mom let Allie out like normal. Later, I went outside to get Allie. She wasn’t there. We called her and she didn’t come (which she usually would after 15-20 minutes). My mom called neighbors and hadn’t seen her either. So we decided to wait, since she always came back on her own.

(Allie this past winter)

I remember eating dinner when we got a call. My mom didn’t recognize the number so she didn’t pick it up. Over the answering machine we heard an automated message saying our dog had been found and was at the nearby animal hospital. My mom went to call the people back while my brother and I continued eating.

I guess the person told my mom that Allie had been hit by a car. They were going to take her to another animal hospital and they would call my parents if she had internal bleeding (in that case she would die).

(Allie in the snow this past winter)

She survived with little damage but her one leg hung loosely at her side. We tried physical therapy but nothing worked. So we had to have it amputated. She lost her front left leg but is otherwise like any normal dog and can still run faster than other dogs I know.

The only reason she survived is because someone put her in their car and drove her to a local animal hospital. The vet said she probably would have been in too much shock to survive much longer without intervention. We are so thankful for whoever saved her, though we will never know who it is (security reasons). 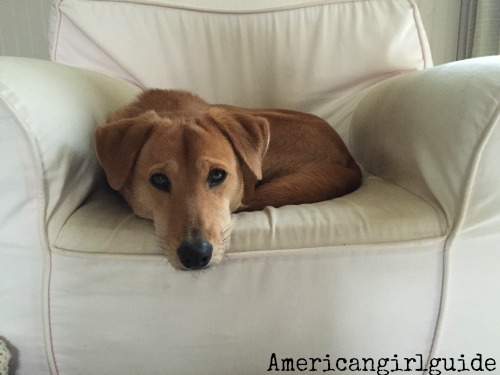 (Allie in her favorite chair)

Ok, now onto some facts about Allie.

Breed: We aren’t exactly sure, but probably Lab, chow (she has a purple tongue), and German Shepard.

Birthday: Summer time was the vets estimate (No one was exactly sure).

Fun Fact: Her name was originally Tia but we changed it to Allie because we liked it and it sounded a lot like Alex’s 🙂

Toy: The cat (she is not always the nicest to him).

Favorite place to sleep: Her own couch or outside.

Favorite treat: Raw hide (a type of bone/treat thing) or any kind of meat.

Do you have any pets? If you don’t have pets, which kind would you like if you could have one? I’d love to hear your answers in the comments.

Also, what did you think about this post? Would you like to see another similar one about my chickens?

36 thoughts on “The Story of My Three Legged Dog”