Hey everybody! Today I’m going to be sharing with you a WordPress tutorial on how to recover a previous draft of a post. I was mind blown when I figured this out. Before I show you, let me share with you some commentary. I wrote this, back when I thought I had lost the premiere of After Camp. Little disclaimer, sometimes I’m pretty weird, this is an example of that 😉 Also, it may be a bit confusing, I had just typed it in one sitting  and I haven’t changed it since then (except to fix grammatical errors) Without more rambling to interrupt, start reading:

Hi. I know I was supposed to post over the weekend but I was busy. This isn’t an apology post though, well it sort of is. This is just me. Talking. So I was really busy doing a lot of super fun stuff. I had an awesome swim meet yesterday (we won!) and I went to a trampoline park with some friends Saturday! I was planning on sitting down and writing out part two of After Camp tonight (Monday) and having it posted by tomorrow and that’s when things got ugly. I was already a little angry at myself for not keeping to my time commitment to blogging, but I  thought “I’m not that far behind I can still catch up.”

As some of you may know there is a WordPress app. I use it a lot to reply to comments and read other people’s posts but I don’t write posts on it a lot. So over the weekend I was at a friend’s house and they were watching a movie that I didn’t want to watch so I thought, “Hey! Perfect time to blog on my iPod.” So I went to the draft I had started a few days before and started writing.

Today when I read through it and I saw that it said people had commented on it and for a second I was worried that I had accidentally posted it. I took a closer look only to realize that the comments where the ones from the premiere of After Camp. When I was scrolling I realized that the premiere of  After Camp didn’t pop up any where, my blog home, reader, or on any device. I looked through my trash folder and it looks as though it has vanished. I don’t know how or when, this was about twenty minuets ago.(This was actually January 11th) None of my real life blogger friends answered my calls and I talked to some of my friends but they don’t really understand. So then I sat down and wrote this whole post. Straight. If you’ve read the whole thing congrats! This probably isn’t what anyone really wants to read, I don’t know if I’ll even post this. I probably will. So I just want to say thank you to all of you. You probably don’t know this, but in life I get pretty stressed and though I love blogging it also stresses me out. So yup that’s basically this post. Does any one know how to fix this?

If I had known this feature on WordPress, well I probably wouldn’t have been so stressed 😉 So, if you ever have this problem. You can look at this post for help on how to fix it. Let’s get started. 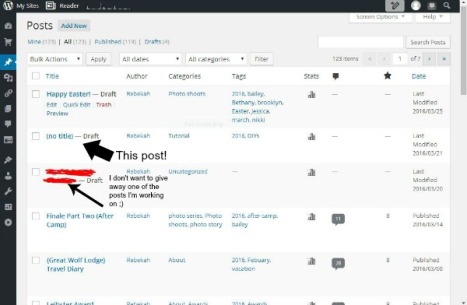 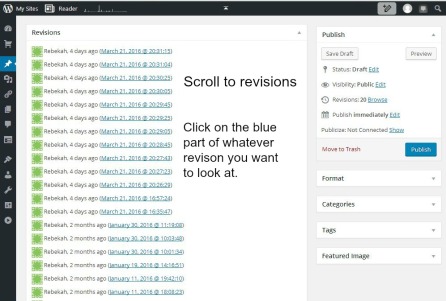 Scroll down to the bottom where it says revisions click on it so that all the copies pop up. Click in blue the one you want (this may require trial and error if you are not exactly sure which one you need)

Click the blue button to restore that revision. You can scroll through to read the post. There is no way to see the pictures unless you restore it, but you can restore different copies as many times as you want.

Have you ever had this problem? If so, let me know how you fixed it. That’s it for this post. I hope you found it helpful. If you like this type of posts or would like to see more, comment below. Did that sound like a robot? I don’t know, it sort of did to me! How should I end this post? Have a wonderful day! 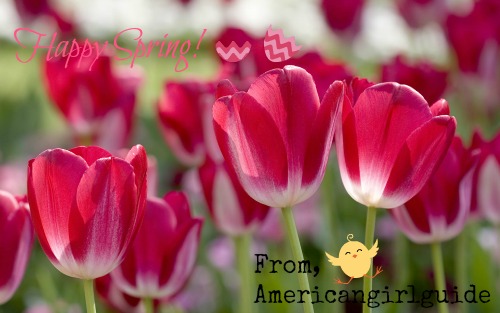 These secret messages are so much fun, but I never know what to put in them 😉

14 thoughts on “WordPress Tutorial- How to Recover a Draft”